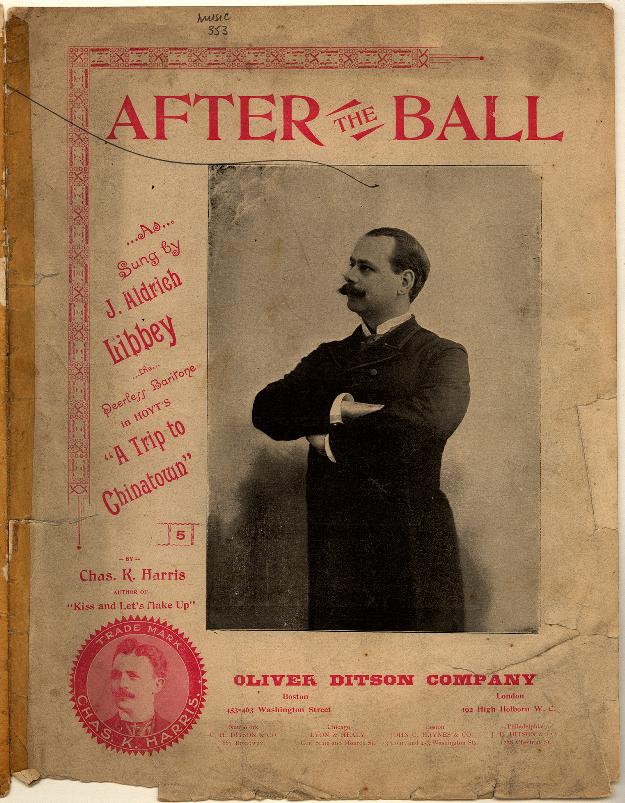 “On April 7, 1894, the Hyperion Theater in New Haven, Connecticut, presented a performance of one of the era’s most popular musical comedies, ‘A Trip to Chinatown.’ Having made its debut in New York in 1891, the show already had established the record for longest-running Broadway musical, a mark it held for nearly three decades.

It is unknown whether the nineteen-year-old Charles Ives attended the performance. He had arrived in New Haven the previous spring to attend Hopkins Grammar School in preparation for matriculating at Yale, and, as discussed in Chapter 1, he subsequently tried to arrange for run-throughs of his ragtime dances by members of the Hyperion Theater orchestra.

We do know that Ives became acquainted with ‘After the Ball,’ the celebrated song by Charles Harris that was featured in ‘A Trip to Chinatown,’ for he later included a melodic phrase from the tune in one of the ragtime-influenced pieces he composed for theater orchestra. His quotation of ‘After the Ball’ appears in the second movement of ‘A Set of Pieces for Theater or Chamber Orchestra (ca. 1914),’ where it evokes the memory of hearing popular music emanating from a lively inn.

‘After the Ball’ was a fitting selection for this purpose, and especially so for a composer who did not often integrate contemporary popular music, other than ragtime, in his own compositions. Published in 1892, the sentimental ballad blends melodramatic nostalgia with a catchy hook, a combination that resonated with American consumers, sold millions of copies of sheet music, and became the music publishing industry’s biggest hit to that date.

‘After the Ball’ became ubiquitous: Ives may have heard it during his trip to the 1893 World’s Columbian Exposition in Chicago, where John Philip Sousa’s orchestra played it, as part of the Hyperion Theater performance of ‘A Trip to Chinatown,’ or at a high school function, a local tavern, or a home parlor.”
-excerpt courtesy of, “Struggling to Define a Nation: American Music and the Twentieth Century,” by Charles Hiroshi Garrett, 2008. (top) “After the Ball,” sheet music cover courtesy of David M. Rubenstein Rare Book & Manuscript Library by way of Duke University Libraries’ Digital Collections, originally published by Oliver Ditson Company, 1892

“Charles K. Harris sings his own song ‘After the Ball,’ from ‘A Trip to Chinatown.’ Published in 1892, it was supposedly the first song to sell a million copies of sheet music. This film must have been made prior to December 1930 when Harris died.”
-video courtesy of Adam G. Swanson on YouTube, 2009