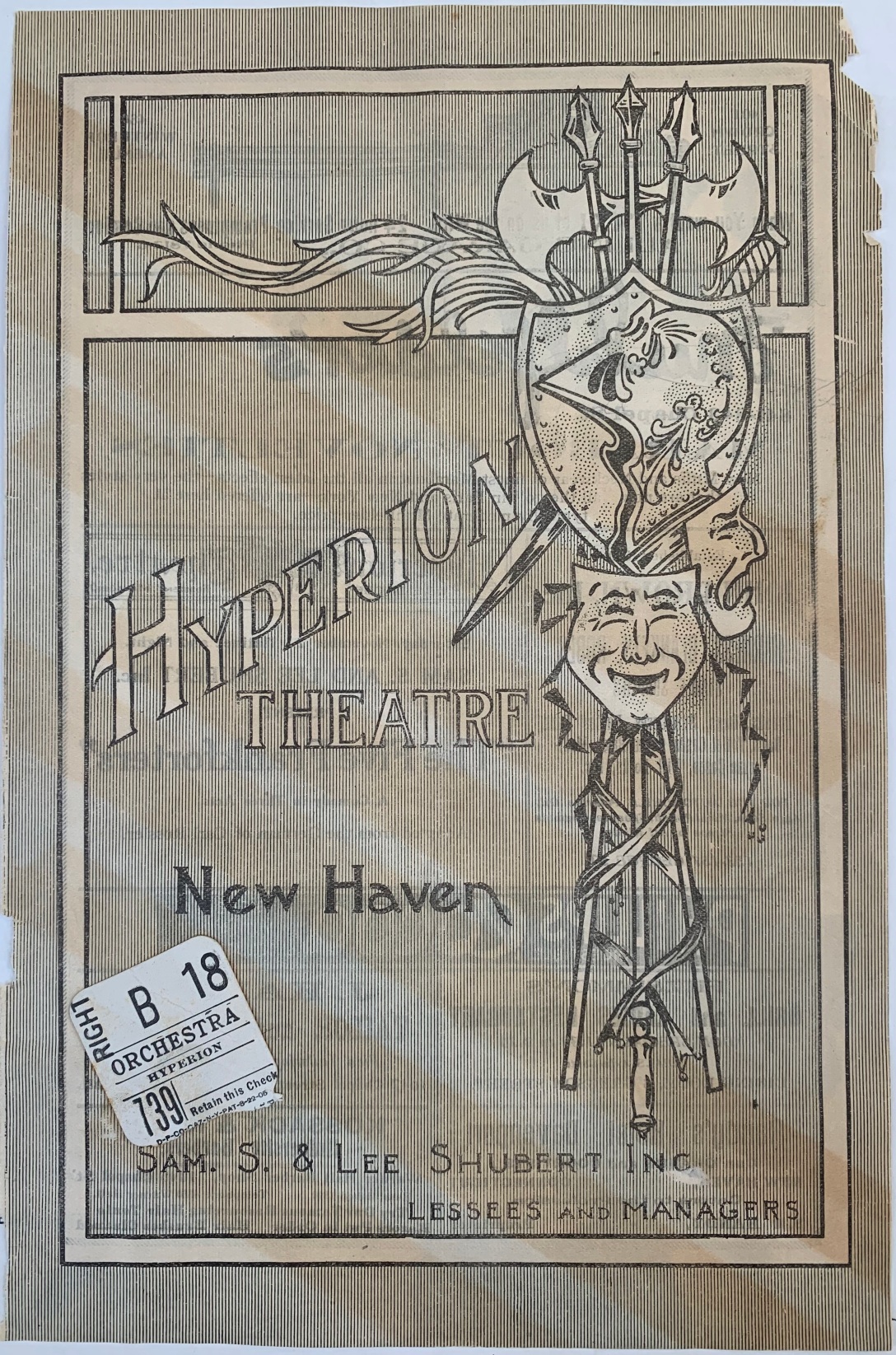 E. D. Eldridge, Former Head of the Waldorf Theater, Now in Charge. — TEN YEARS WITH THE SHUBERTS CO. — Will Make No Changes in Corps of Assistants or Alterations in House.

“E. D. Eldridge, who was recently appointed manager of the Hyperion theater by the Shuberts, has arrived in the city and is making plans for the coming season. He stated last night that the management will make no changes in the corps of assistants at the theater and that no alterations will be made on the building itself during the coming season. Another year Mr. Eldridge thinks that the Shuberts will make the Hyperion building one of the best in the country.

The new manager has been in the employ of the Shuberts for the past ten years, and comes here direct from the Waldorf theater in London. The Waldorf theater is the largest of the forty-one owned in London by the Shuberts, and is the second most beautiful playhouse in that city, the first being the famous Scala theater. The Waldorf is located at King’s Way and Catherine street, and is in the heart of the theater district.

Mr. Eldridge says the theaters of London and the customs of the people who attend them are far different from those in this country. The exterior of the English theater is much more prepossessing and the structures are among the most beautiful of the cities. Inside the American playhouse presents a better appearance. In addition to the costly decorations the lighting is much better in this country. In England the acting is done in the pit and the ladles and gentlemen in the stalls and the first balcony all have to wear evening clothes.

The attendants at the English theatres and all those officially connected except the ticket sellers in the box office wear a certain uniform and each theatre has a special insignia for its employes which distinguishes them from those of other houses. The performances there begin at 8 o’clock and do not end until 11:15 and each has a curtain raiser.

Mr. Eldridge arrived from London early in July and has since been in New York. Before going to England he managed theatres for the Shuberts in Utica, Rochester, Troy, New York city, and Chicago. With his long experience he will doubtless make a great success of the Hyperion.

The feeling between the university and the Hyperion, which at times in the past has been very bitter, has during the past year with Manager J. R. Gilfillan representing the Shuberts, been of the best, and Mr. Eldridge intends a continuance of it. For the opening night of college an exceptionally good attraction has been billed to put the students in good humor for the season.

The first play will be given Labor day when Antone Maiore will be presented by an Italian company. The next play will be September when the ‘Ham Tree’ with McIntyre and Heath will be the attraction. After college opens four and five plays a week will be given, some of the principal ones being Blanche Bates in ‘The Girl of the Golden West,’ Joe Weber in a new play, David Warfield in ‘A Grand Army Man,’ Christie McDonald in ‘The Belle of Mayfair,’ Henry Woodruff in ‘Brown of Harvard,’ ‘Shore Acres,’ ‘The Gingerbread Man,’ ‘Sweet Kittie Belairs,’ E. H. Sothern in his father’s old piece, ‘Lord Dundrery,’ Julia Marlowe in ‘Joanne D’Arc’ and other plays, and many other first-class attractions.

Mr. Eldridge with Mrs. Edridge is stopping at present at Duncan hall. Within a few weeks they will take up permanent residence in a new house on George street which is being fitted up for them.”
-Excerpt courtesy of the Library of Congress, Chronicling America, New Haven Daily Morning Journal and Courier, Friday, August 23, 1907. (top) Image courtesy of Hyperion New Haven collection, Hyperion theatre program, 1912

“In 1913 E.D. Eldridge, the manager of the Hyperion, convinced the New Haven Hotel Co., owners of the Taft Hotel, to construct the Shubert Theater. It was designed by Albert Swazey of New York and built behind the Taft Hotel. It was oriented toward College Street and was set behind a brick hotel, the Hotel Adams. It was named for the Shubert brothers, longtime theater operators in New Haven and major stockholders in the project. When completed the Shubert was the largest theater in the state with a capacity of 1,820 seats. It opened on December 12, 1914. Many musicals, dramas, and ballets over the years opened at the Shubert. Bunnell’s New Haven theater, a competitor of the Shubert, was destroyed by fire in 1915, leaving the Shubert as the only legitimate theater downtown soon after it opened.”
-Excerpt courtesy of the United States Department of the Interior, National Register of Historic Places, Chapel Street Historic District, 1982